Despite the danger, the illegal trade for unexploded WWI shells found in European battle fields is growing.

di Angus Crawford, BBC News
Every year hundreds of tons of unexploded First World War shells are found on the battlefields of France and Belgium – two workmen were killed in Ypres yesterday when one blew up on a building site.
Amateur historian Maarten Otte says the legacy of war lies just below the surface and is still potentially lethal.
High explosive shells are found almost every day and are left on the side of the road for bomb disposal teams to pick up.
But there is evidence that some collectors dig up these bombs and try to sell it.
“Diggers try to find a pit to find things to sell or to put in their own collections,” says Otte. “Every week I find new pits – they are very active.”
But Leiutenant Colonel Guy de Decker from Belgium Bomb Disposal says this is risky business, since shells become more dangerous as they deteriorate over time.
“Totally stupid I think,” says Lt Colonel Guy de Decker. “This is playing with their own life and also the life of their civilians.”
Fonte:
http://www.sbs.com.au/news/article/2014/03/21/ww1-bombs-still-serious-danger
Foto: http://www.sbs.com.au/ 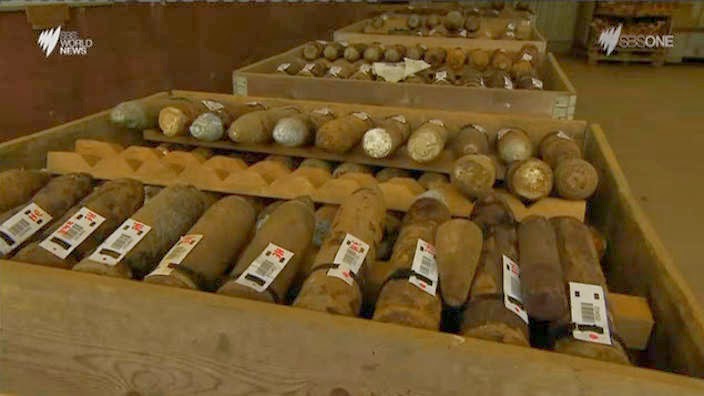