Liberty-Bryan. BY ALISON CUTLER. Within minutes of dropping their giant magnet into a river running through Georgia’s Fort Stewart, YouTubers Bryce Nachtwey and Matt Jackson were pulling up belts of rusted ammunition, mortar and armor plates. In the eyes of a magnet fisher or treasure hunter, they had hit the tactical jackpot. Then, they reeled in a mysterious Delta Air Lines bag stuffed to the brim with rockets. There were 86 in total, among other military equipment, the fishers counted in a YouTube video. “This is probably the craziest thing we’ve ever found,” Nachtwey said in his YouTube video, adding that they believed the bag was full of “stolen military equipment.” The group’s excitement was quelled, however, after they notified the authorities to turn in the items. In the end, Nachtwey, Jackson and the third member of their group left with $340 in fines and a court date. After they pulled up the rockets, armor plates, bullets, navigation equipment and other items, the group called the police and a military police officer arrived to assess the situation, the video showed. A game warden with the Fort Stewart Conservation Law Enforcement arrived and told the group they would be getting cited, according to the Military Times. The alternative to tickets, the game warden added in the video, would be taking the group to jail for acquiring military property, even though they called authorities to handle it. “You’re all getting tickets. You can come to court and talk to a judge,” the warden said. “The reason magnet fishing is not allowed is because of exactly what y’all got right there. You don’t know what’s going to blow up and what’s not going to blow up.” The warden added that even if the group intended on cleaning up the waterways by removing the material, the base’s bomb disposal squad is responsible for that. 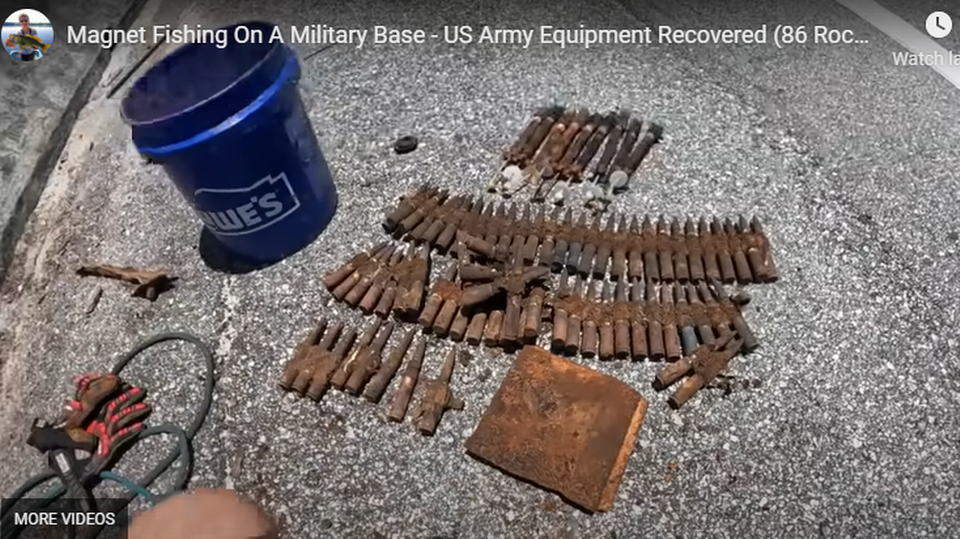