Leigh: What to do if you find old ordnance on the beach

COASTGUARDS have issued a warning of what to do if people find unexploded ordnance along the coast, following the discovery of an old the armour piercing shell at Chalkwell Beach in early January. More than 80 items have been found and removed from Southend’s shores in 2020, with finds more prominent in the winter when winds are stronger. The Army’s Explosive Ordnance Disposal team, who were called to the incident, said that most items found alongside the shell were spent incendiary bombs used in the Second World War. A spokesman explained their prevalence: “The Southend and Thames Estuary area was often used by bomber aircraft in the Second World War as a dumping ground for their bomb loads during the war if their primary target was not possible to hit on the way to or back from London. “The Thames Estuary was used as a navigation waypoint up into London City / London Docks. Anti aircraft sites were also dotted along our coastline, so anti aircraft shells are quite common. “Also, coupled with a Ministry of Defence base and testing range that has been based at Shoebury and Foulness for over 150 years, all types of unexploded military ordnance can and does wash up on the shore and offshore.

“It comes in different shapes and sizes and isn’t always easy to spot.

“Because these items can be so dangerous, if you ever see something suspicious or out of the ordinary on the beach or in the sea, do not touch it, move it or take it home.”

“An explosive charge would then ignite the incendiary material, often starting a raging fire.

“Normally the tail fins would burn away, but we found a number of items with tail fins still intact.

“These pose no danger as they had exploded and ignited on hitting the ground or water of the estuary.

“Should you see anyone in trouble on or near the coast, don’t hesitate to dial 999 and ask for the Coastguard, you could save someone’s life.”

People should always call 999 if they see a suspicious item on the beach that they believe to be ordnance.

Got a local story? Email: editor@leightimes.co.uk. 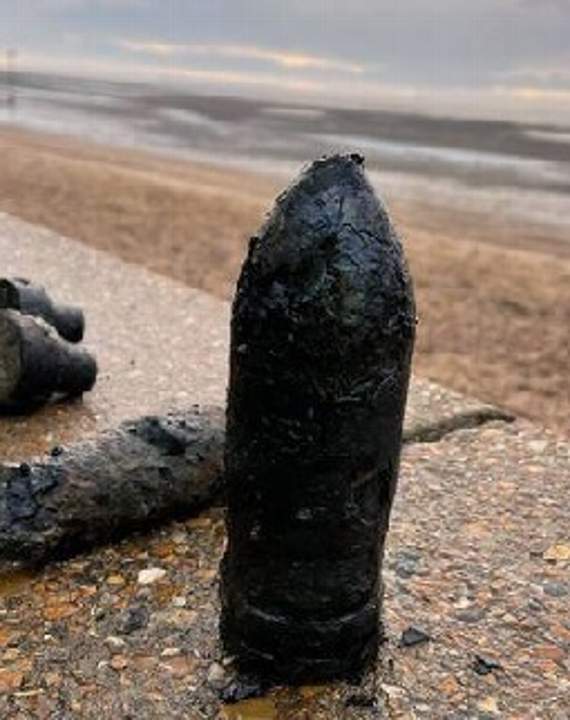