Million of landmines in various parts of the world continue to take innocent lives. Though warring parties settle their scores in any conflict, the worst sufferers remain the ordinary people.  Of all the lethal arms, landmines are the most potent and dangerous weapons of destruction, especially for children. Hundreds of thousands of children and animals have been killed or maimed by these deadly devices. These landmines have also decimated thousands of acres of crop.

No end to malaise

According to UNICEF estimates, landmines are said to be killing at least 800 people a month. These lethal devices have exploded under more than one million people since 1975.  Experts say there seems to be no end to this malaise. Around 110 million landmines are still buried in the ground in at least 64 countries globally. These lethal devices remain active for several decades.  Afghanistan is said to be one of the most heavily mined countries in the world. A Khmer Rouge general in Cambodia once said about landmines that it’s a perfect soldier: Ever courageous, never sleeps, never misses.

There are two types of landmines that are mostly used during the conflict. One is anti-tank and another is anti-personnel. The anti-personnel mine is the most lethal and explodes even with a gentle pressure of a child. Such mines come in various shapes and sizes. Some of them look like stones, other in the form of pineapples and toys.

The task to clear landmines is laborious and time taking. It also involves huge expenditure to use specialised tools and techniques. What is ironic is that a mine as cheap as $3 dollar can cost at least $1000 to clear. The mine clearance required skilled personnel and a single person could clear an area of only 20 to 50 square metres per day. 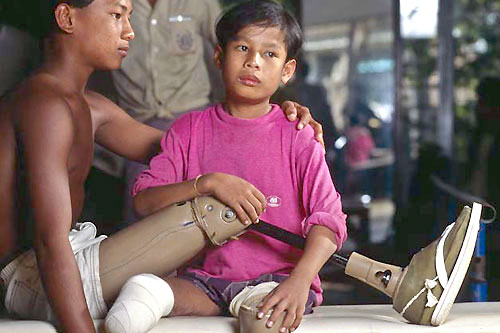