“The ultimate purpose of those war-based endeavours was destruction, such as the training of fighter-bomber pilots or the development of the Avro Arrow, a fighter jet.” Bald Head Spit, on the north shore of Lake Ontario, “was used as a bombing training run during the Second World War, and after the war, thousands of pounds of unexploded ordnance was left behind. “Due to the potential of these bombs going off, access to this area is now forbidden. This has led the area to become a wildlife refuge, as well as one of the few grassy sand dunes left intact in southern Ontario.” In “Echo Spit,” a wall relief almost four feet high, 29 green bomb profiles are arranged in a pyramidal formation. A pyramid traditionally conveys order, which the destructive nature of the objects belies.

Mounties are reminding anyone who comes across explosives or live ammunition to call police for assistance and to not handle them yourself.

Foto: David Trautrimas, Echo Spit, wall relief, acrylic and spray paint, 45 by 68 inches. Not for sale. Part of ‘The Lake Dives Where The Earth Curves’, his exhibition at The Assembly. – Douglas Haggo photo 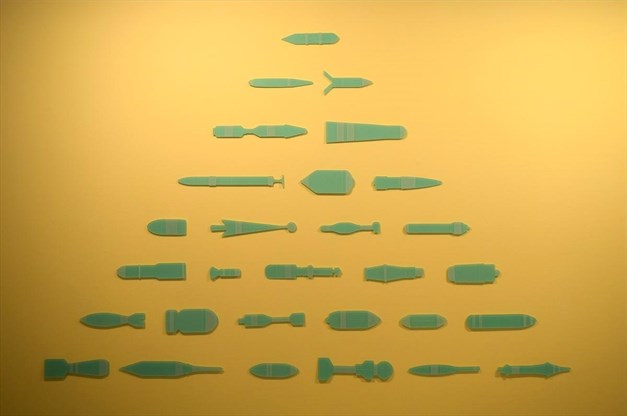