America Still Has a Problem With Unexploded Civil War Bombs

By War Is Boring

On April 22, members of the U.S. Army’s 707th Explosive Ordinance Disposal Company left their base on a mission to detonate a very unusual object. Construction crews had discovered an Absterdam Type 2/3 Projectile in Ilwaco, Washington. This type of explosive artillery shell dates to around the time of the American Civil War. The soldiers, based at Joint Base Lewis-McChord, received a request for assistance from local police. The soldiers moved the shell to a quarry and blew it up. “It’s one of those things that, as long as it’s left alone, it’s not going to do much,” Long Beach police chief Flint Wright told the Chinook Observer. “But if it’s jostled, it could be quite dangerous.” But what the Hell was a Civil War artillery shell doing in Washington State? Most likely, it was a leftover from troops stationed at Fort Canby, one of two bases the Union built during the Civil War to defend the mouth of the Columbia River from a possible — but highly unlikely — surprise attack by the Confederacy. The Union troops could have misplaced the round, or it might have misfired during artillery training. Troops at Fort Canby frequently practiced firing cannons into the nearby hillsides. The round sat undisturbed until being discovered more than a century-and-half later. It may sound strange, but this happens more often than you might think. Capt. Shawn McMickle, the soldiers’ company commander, said that he’s responded to three Civil War-era explosives since he’s served with the Army in the Pacific Northwest.  Typically, construction crews and loggers find the war relics buried in the ground or in the brush. But they can — and do — turn up in more unusual places. On Jan. 21, members of the Fort Belvoir, Virginia-based 55th EOD Company responded to a call from police and firefighters in Georgetown, Maryland. They’d found a Civil War cannonball in the chimney of an 1890s townhouse. Live bombs from past conflicts can linger for years, often decades. Or in the case of Civil War bombs, well over a century. Don’t let their age fool you — these bombs can still be incredibly dangerous. If you see a rusty cannonball in the woods, it’d be good advice not to touch it. That’s a lesson that Civil War relic hunter Sam White and his neighbors learned the hard way. In February 2008, White worked on restoring a 75-pound naval cannonball in his driveway when it exploded. The blast killed the 53-year-old Virginian and sent shrapnel through the porch of a neighbor’s house a quarter-mile away — 140 years after the Civil War ended. When White was alive, he’d estimated that he worked on about 1,600 bombs he’d found for museums and collectors. When he died, he had 18 other cannonballs lined up in his driveway. Dealing with the explosive remnants of war is a worldwide struggle. On March 23, a construction crew in Bermondsey, England inadvertently uncovered a massive World War II bomb dropped by the German Luftwaffe during the Battle of Britain. Authorities evacuated hundreds of homes in the area and called in soldiers for help. British troops secured the bomb and transported it to nearby Kent to safely detonate it. The loud bang of the huge explosion caught many nearby residents off guard. Thousands of unexploded bombs and shells left over from the world wars litter Europe. Berlin officials estimate there’s around 3,000 bombs still buried under the city. Berlin’s growing economy — and subsequent construction boom — means that unexploded bombs turn up on a regular basis. In the European countryside following World War I, grass grew back and nature reclaimed the battlefields. But many explosives remained hidden — sometimes even poison gas munitions. They’ve occasionally killed agricultural workers tending to fields. But for the most part, these old bombs tend to cause nothing but momentary scares — odd events to fill space in the local news. The explosive remnants of yesterday’s wars often pose larger problems when they enter into the mix of today’s wars. For instance, decades of conflict have made Kurdistan one of the most heavily mined areas on earth. Along the Iraqi–Syrian border refugees moving between Syria and Iraq’s semi-autonomous Kurdish region often risk stepping on mines. And there’s still danger after they cross the border. The Domiz refugee camp — home to tens of thousands of Syrian refugees — sits at the site of a former Iraqi army base surrounded by minefields. Wars always have unintended consequences. And they can still inflict casualties long after the last shot is fired. This article by War is Boring originally appeared at War is Boring in 2015. 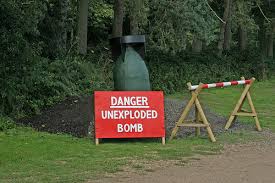