The Syrian Network for Human Rights (SNHR) announced in its monthly report released today that 1,271 civilians, including 229 children, 134 women, and 104 victims of torture, were killed in Syria in 2021, noting that killing of Syrians has been continuous since March 2011, adding that 69 civilians, including 16 children, seven women, and seven victims of torture, were documented killed in Syria in December 2021. The 33-page report states that the crime of murder has become widespread and systematic, mainly at the hands of Syrian regime forces and affiliated militias, adding that the entry of several parties into the Syrian conflict has increased the importance and complexity of documenting the victims killed in Syria. The report notes that since 2011, the SNHR has created complex electronic programs to archive and categorize the victims’ data, enabling the SNHR to catalogue victims according to their gender and the location where each was killed, the governorate from which each victim originally came, and the party responsible for the killing, and to make comparisons between these parties, and identify the governorates which lost the largest proportion of residents. The report catalogues the death toll of victims according to the governorate in which they were killed, rather than by the governorate they originally came from. This report details the death toll of victims documented killed by the parties to the conflict and the controlling forces in Syria both in the past month of December and in the whole of 2021, particularly focusing on the victims amongst children and women, those who died due to torture, and victims amongst media, medical and Civil Defense personnel. As the report explains, the statistics provided for the death toll of victims include those related to extrajudicial killings by the controlling forces in each area which occurred as a violation of both International Human Rights Law or International Humanitarian Law, and do not include deaths arising from natural causes or those caused by disputes between individual members of society. The report also includes the distribution of the death toll of victims according to the perpetrator parties. In addition, the report draws upon the ongoing daily monitoring of news and developments, and on an extensive network of relations with various sources, in addition to analyzing a large number of photographs and videos. The report notes that the killing of civilians in Syria has continued for the eleventh consecutive year, having gone on since the outbreak of the popular uprising for democracy in Syria in March 2011, resulting in casualty numbers that are among the largest worldwide, demonstrating the instability of the situation in Syria, and underlining the fact that it is still the most dangerous country in the world for civilians, and remains an exceptionally insecure and dangerous place wholly unsuitable for the return of refugees. Meanwhile, the report adds that first three months of the year saw the killing of approximately 34% of the 2021 death toll that the report documented. March also saw a sudden military escalation by the Syrian-Russian alliance forces, launching air and ground attacks targeting civilian areas outside the control of the Syrian regime in northwest Syria. March also saw a Russian military escalation, the largest since March 6, 2020 – from the date of the entry into force of the Russian-Turkish ceasefire agreement. With the beginning of June, the Syrian-Russian alliance forces launched a military campaign, targeting the Jabal al Zaweya area and its surroundings which remain outside the Syrian regime’s control in northwest Syria, using mostly ground attacks on civilian areas. This military campaign continued until September; as the report documented, it resulted in the deaths of 61 civilians, including 33 children and 12 women. The report identifies a number of the most prominent features that distinguished this military campaign, including the intense bombardment following the flights of reconnaissance planes, with attacks concentrated on gatherings of people, an intensive deployment of higher-quality weapons in terms of their accuracy in hitting the target and in the great destruction caused to the target site, as well as the deployment of munitions whose use hadn’t been previously documented in the Syrian conflict. As the report reveals, Daraa governorate also saw a military escalation by Syrian regime forces backed by Iranian militias, in retaliation for its people’s peaceful and civilized rejection of the illegitimacy of the ‘presidential elections’ held unilaterally by the Syrian regime at the end of May. This military campaign extended from June 24 until October 2021, and included a siege on Daraa al Balad area and Tareeq al Sadd and the Camps neighborhoods, which resulted in the deaths of civilians. The report refers to the announcement by the United Nations High Commissioner for Human Rights, Ms. Michelle Bachelet, on September 24, 2021, that 350,209 people had been identified killed in the conflict in Syria between March 2011 and March 2021, including 26,727 women and 27,126 children, noting that the largest number of killings was recorded in Aleppo governorate, followed by Damascus Suburbs, Homs, Idlib, then Hama. The report notes that the Syrian Network for Human Rights is a primary source of victim data cited in all statistical analyzes issued by the Office of the High Commissioner for Human Rights. The report adds that on October 20, Syrian regime forces launched the largest military attack on the northwest region of Syria since March 6, 2020, in terms of civilian casualties. The attack took place in the densely populated Ariha city, two days after the start of the sixth round of talks of the Constitutional Committee, in a clear indication of the Syrian regime’s indifference to the agreements that could result from these meetings. 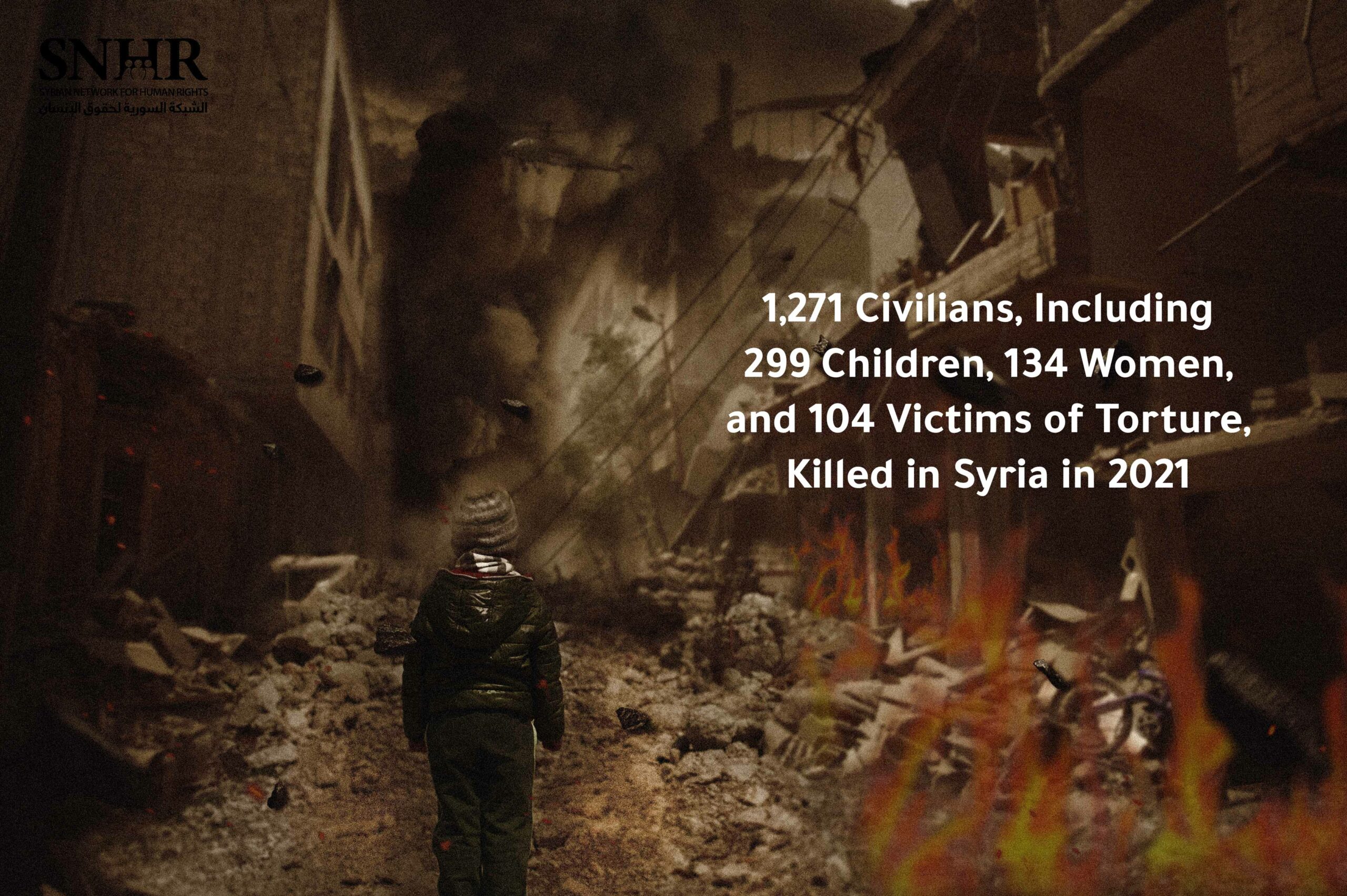